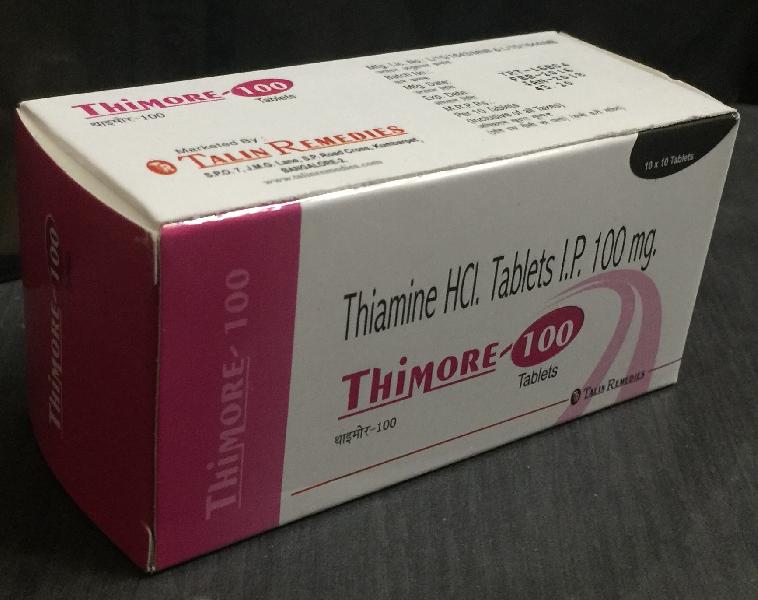 Thimore-100 (Thiamine) is a vitamin, also called vitamin B1. Vitamin B1 is found in many foods including yeast, cereal grains, beans, nuts, and meat. It is often used in combination with other B vitamins, and found in many vitamin B complex products. Vitamin B complexes generally include vitamin B1 (thiamine), vitamin B2 (riboflavin), vitamin B3 (niacin/niacinamide), vitamin B5 (pantothenic acid), vitamin B6 (pyridoxine), vitamin B12 (cyanocobalamin), and folic acid. However, some products do not contain all of these ingredients and some may include others, such as biotin, para-aminobenzoic acid (PABA), choline bitartrate, and inositol.

The effectiveness ratings Thimore (vitamin B1) are as follows:

How does it work? : Thiamine is required by our bodies to properly use carbohydrates.

Are there safety concerns? : Thiamine is Likely Safe when taken by mouth in appropriate amounts, although rare allergic reactions and skin irritation have occurred. It is also Likely Safe when given appropriately intravenously (by IV) by a healthcare provider. Thiamine shots are an FDA-approved prescription product. Thiamine might not properly enter the body in some people who have liver problems, drink a lot of alcohol, or have other conditions.

Special precautions & warnings : Pregnancy and breast-feeding: Thiamine is Likely Safe for pregnant or breast-feeding women when taken in the recommended amount of 1.4 mg daily. Not enough is known about the safety of using larger amounts during pregnancy or breast-feeding.

Are there interactions with medications?

Are there interactions with herbs and supplements?

Are there interactions with foods?

What dose is used? The following doses have been studied in scientific research :