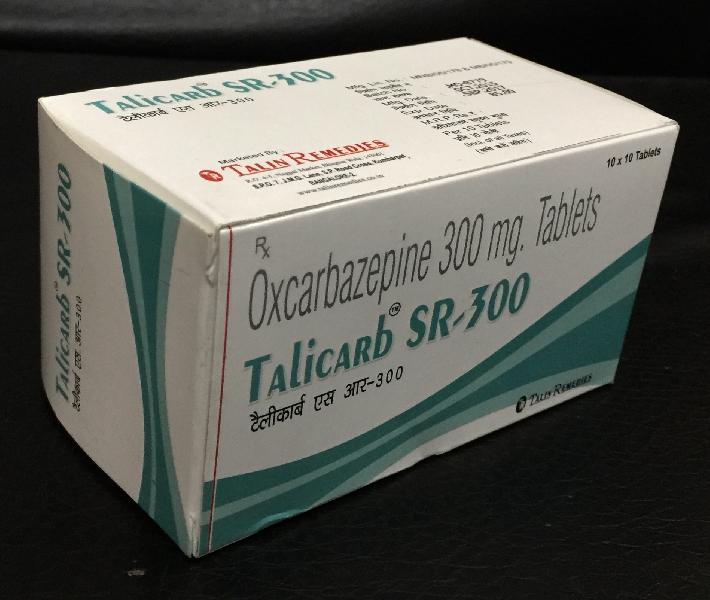 Talicarb SR (Oxcarbazepine) is an anticonvulsant and mood stabilizing drug, used primarily in the treatment of epilepsy. It is also used to treat anxiety and mood disorders, and benign motor tics. Oxcarbazepine is a structural derivative of carbamazepine, with a ketone in place of the carbon-carbon double bond on the dibenzazepine ring. This difference helps reduce the impact on the liver of metabolizing the drug, and also prevents the serious forms of anemia or agranulocytosis occasionally associated with carbamazepine. Aside from this reduction in side effects, it is thought to have the same mechanism as carbamazepine - sodium channel inhibition (presumed to be the main mechanism of action) - and is generally used to treat the same conditions.  Oxcarbazepine has recently been found to be associated with a greater enhancement in mood and reduction in anxiety symptoms than other drugs employed to treat epilepsy.

Pharmacology : Oxcarbazepine is a prodrug which is activated to eslicarbazepine in the liver.

Nursing mothers : Oxcarbazepine and its active metabolite MHD are excreted in human breast milk. Because of the potential for serious adverse reactions to oxcarbazepine in nursing infants, a decision should be made about whether to discontinue nursing or to discontinue the drug in nursing women, taking into account the importance of the drug to the mother.